No. 13 Tennessee's defense shuts down McNeese 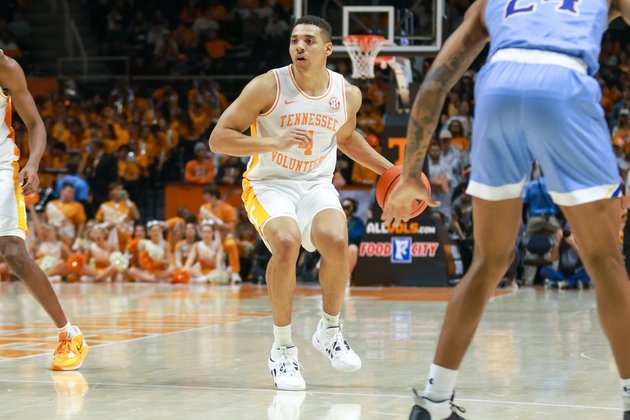 Santiago Vescovi made four 3-pointers and finished with 16 points and No. 13 Tennessee delivered its stingiest defensive effort of the season en route to a fifth straight win, 76-40 over McNeese on Wednesday night in Knoxville, Tenn.

The Volunteers shot 42.6 percent from the floor and held McNeese (2-6) to 28.6 percent shooting, including 2 of 17 (11.8 percent) from 3-point range, and forced 24 turnovers. It was the fewest points and lowest shooting percentage allowed this season by Tennessee.

Christian Shumate had eight points and 12 rebounds for McNeese, which made a season-low 16 field goals during its worst shooting night on the young season. The Cowboys made 32 baskets during an 86-83 loss at UT Martin on Monday.

Tennessee led 30-14 at the break, then scored the first 10 points of the second half. A Nkamhoua dunk, a 3-pointer from Vescovi and five consecutive points from Phillips allowed the Volunteers to build a 40-14 advantage.

The Volunteers held McNeese to 6-of-26 shooting and 0-of-7 from 3-point range during the first half. They also forced 13 first-half turnovers that turned into 16 points and paved the way for a 16-point halftime edge.

Tennessee, which is on a five-game winning streak, has posted 20 consecutive home victories since a loss to Kentucky in February 2021.

McNeese fell to 0-32 against teams ranked in the Associated Press Top 25 since January 1981.