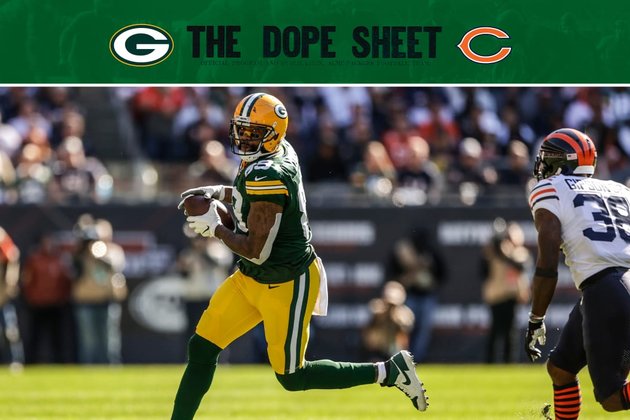 The Green Bay Packers (4-8) finishes up a run of five road games in seven weeks with a trip to play the Chicago Bears (3-9).

The Green Bay Packers (4-8) finishes up a run of five road games in seven weeks with a trip to play the Chicago Bears (3-9).

The Packers and the Bears enter Sunday's game tied for the most regular-season wins in NFL history with 786 each.Sunday will mark Game No. 206 in the NFL's oldest rivalry. The Packers hold a 104-95-6 edge in the series, which includes two playoff games (1-1).Overall, the Packers have won seven straight games against the Bears and 11 of the last 12.Green Bay's current winning streak of seven games against Chicago is tied for the second longest by the Packers in series history (10 straight from 1994-98, seven-game streaks in 1928-30 and 2000-03).Including a 2010 playoff victory at Chicago, Green Bay has won 23 of the last 28 meetings between the rivals at Soldier Field, including 11 of the last 12.Seven of the last 10 games between the two clubs at Soldier Field have been decided by single digits.Head Coach Matt LaFleur is the first coach in league history to win his first seven regular-season games against Chicago (Minnesota's Dennis Green won his first six from 1992-94).QB Aaron Rodgers has posted a 125-plus rating and multiple TD passes in each of his last five games vs. Chicago, making him the the first NFL quarterback with five straight against a single opponent.In his last five games against the Bears, Rodgers has completed 105 of 138 passes (76.1 pct.) for 1,221 yards, 16 TDs and no INTs for a 141.0 passer rating.Rodgers has recorded seven straight games (2019-22) without an INT vs. the Bears, the longest streak against Chicago in NFL history.With Rodgers as the starting quarterback, Green Bay is 24-5 (including playoffs) against the Bears, with one loss coming in 2013 after Rodgers left the game with an injury after the first series.In the 29 games against Chicago, Rodgers has an overall passer rating of 108.1. Of the starters that have attempted 300-plus passes against the Bears (including playoffs), Rodgers' 108.1 passer rating is No. 1 in league history (No. 2 - Drew Brees, 98.2) according to Stats Pass.Rodgers has posted a 100-plus passer rating in 15 matchups (min. 15 pass att.) and the Packers are 15-0 in those contests. Rodgers has the most 100-plus passer-rating games (min. 15 pass att.) against the Bears since 1950 (stathead.com), passing Brett Favre (11) in Week 17 of the 2020 season.Rodgers has registered 10 games with a passer rating of 125-plus against the Bears (min. 15 att.), the most by a QB against a single opponent.Overall, Rodgers has thrown 63 TDs against Chicago, passing Favre (60) for the most in NFL history vs. the Bears.

FOX Sports, now in its 29th season as an NFL network television partner, will broadcast the game.

Play-by-play man Adam Amin joins analyst Mark Schlereth and sideline reporter Kristina Pink.DIRECTV subscribers can watch the game with NFL Sunday Ticket on Channel 709.All Packers games can be heard on the Packers Radio Network, which is made up of 49 stations in Wisconsin, Michigan, Minnesota, Illinois and South Dakota. This year, the Packers transitioned to a new flagship station in Milwaukee, iHeartRadio Milwaukee's 97.3 The Game WRNW. For a full listing of radio affiliates, go to packers.com/video/radio-network. Wayne Larrivee (play-by-play) and two-time Packers Pro Bowler Larry McCarren (analyst) call the action. McCarren first joined the team's broadcasts in 1995 and enters his 28th season calling Packers games. After originally being paired together in 1999, McCarren and Larrivee enter their 24th season of broadcasts together. They surpassed Jim Irwin and Max McGee for the most regular-season and postseason games broadcast for the Packers with 313 at the 2018 season opener against Chicago.The Packers' radio broadcast is also available on a mobile device through the Packers app or packers.com for anyone that lives in the state of Wisconsin. If you live outside the state, you can stream the game broadcast from a desktop computer through packers.com. It is also available via subscription on Sirius Satellite Radio or NFL Plus (nfl.com/plus).You can also find the Packers radio broadcast on SiriusXM 159 or 387 and on the SXM App under the "NFL Play-by-Play" tab.Sports USA Radio will also be broadcasting on radio to a national audience with Josh Appel (play-by-play) and Doug Plank (analyst) on the call.

This is an abbreviated version of the Dope Sheet. Read the full version here (PDF).

THE DOPE ON THIS WEEK'S OPPONENT

In his 14th season in the NFL, having previously served as an offensive coordinator for two seasons (L.A. Rams, 2017; Tennessee, 2018), a quarterbacks coach for six seasons (Washington, 2010-13; Atlanta, 2015-16), and an offensive assistant for two seasons (Houston, 2008-09).With a 13-4 record in 2021, led the Packers to a third straight NFC North crown while also earning the No. 1 seed in the NFC for the second consecutive season.Became the first coach in NFL history to post 13-plus wins in three straight seasons and his 39 wins from 2019-21 passed George Seifert (38) for the most wins by a head coach in his first three seasons in the league (Elias Sports Bureau). His 39 wins are also tied for the second most by a coach over any three-season span in NFL history, trailing only Mike Ditka's 40 wins with the Chicago Bears 1985-87.Guided the Packers to a 22-2 record (.917) in the regular season at Lambeau Field in 2019-21, the top mark in the NFL over that span and the best home winning percentage by a Packers head coach in his first three seasons. His 22 wins at home were also the most in NFL history by a coach in his first three seasons.In 2019, became the first coach in club history to lead the team to the playoffs in his debut season. Also led the largest one-year win improvement in team history (plus-seven).

Comes to Chicago with 30 years of coaching experience, including 13 in the NFL, and completed his fourth season as defensive coordinator for the Indianapolis Colts in 2021.Under him, the Colts were the only NFL team to be ranked in the top 10 in scoring, run defense and takeaways in both 2020 and 2021. The Colts finished in the top 10 in the NFL in run defense and takeaways in all four of his years, top 10 in scoring defense in three of the four and were the least-penalized defense in the NFL in 2019 and 2021.Spent seven seasons with the Dallas Cowboys (2011-17) and two seasons with the Cleveland Browns (2009-10) following 17 seasons coaching on the collegiate level, including eight seasons as defensive coordinator at Missouri (2001-08).

This is an abbreviated version of the Dope Sheet. Read the full version here (PDF).

The two franchises have met 205 times (regular season and playoffs), which is the most in NFL history.Starting in 1923, the clubs met for 59 straight years until both games in 1982 were canceled as part of a strike-shortened season.Have only met in the postseason twice, with the last meeting coming following the 2010 season. With a berth in Super Bowl XLV on the line, the Packers emerged victorious, 21-14, at Soldier Field.With two wins over the Bears in 2017, Green Bay took and maintained the advantage in the series for the first time since leading 11-10-4 following the 1932 season.Green Bay is 24-5 against Chicago with QB Aaron Rodgers as the starter (including playoffs).

Packers S Adrian Amos was drafted by Chicago in 2015 and played with the Bears for four seasons (2015-18)...P Pat O'Donnell was drafted by Chicago in 2014 and played with the Bears for eight seasons (2014-2021)...Packers players with connections to Illinois include: DL Dean Lowry (Rockford, Northwestern), G/T Royce Newman (Nashville) and TE Robert Tonyan (McHenry)...Bears LB Jack Sanborn attended the University of Wisconsin from 2018-2021...Bears WR Equanimeous St. Brown was drafted by the Packers in the sixth round in 2018 and played for the team in 2018 and 2020-21...Bears DL Mike Pennel Jr. played for the Packers from 2014-16...Bears LB Joe Thomas played for the Packers from 2015-17...Packers offensive line coach Luke Butkus served as an offensive assistant/assistant offensive line coach for the Bears from 2007-09 and was an offensive line coach at the University of Illinois in 2012 and from 2016-18...Butkus, who attended Bloom Trail High School (Chicago Heights, Ill.), also was signed as a rookie free agent by the Bears in 2002 and is the nephew of Hall of Fame linebacker Dick Butkus...Packers defensive coordinator Joe Barry was born in Murphysboro, Ill. ...Packers tight ends coach John Dunn was a football assistant for the Bears in 2016 and an offensive assistant for the team in 2017...Bears offensive coordinator Luke Getsy was with the Packers as an offensive quality control coach from 2014-15, wide receivers coach from 2016-17, a quarterbacks coach in 2019 and the pass game coordinator/quarterbacks coach from 2020-21...Bears assistant tight ends coach Tim Zetts was an offensive quality control coach for Green Bay in 2021...Bears offensive quality control coach Omar Young was an offensive quality control coach for Green Bay from 2017-18...Packers defensive quality control coach Justin Hood was a graduate assistant at the University of Illinois from 2013-14...Packers head coach Matt LaFleur and Bears offensive line coach Chris Morgan coached on the staff together in Washington from 2011-13 and Atlanta from 2015-16...LaFleur also coached with Bears special teams coordinator Richard Hightower in Houston in 2008 and in Washington from 2010-13...Packers special teams coordinator Rich Bisaccia and Bears head coach Matt Eberflus coached together on the staff in Dallas from 2013-17...Packers defensive coordinator Joe Barry and Bears defensive coordinator Alan Williams were on the staff together in Tampa Bay in 2001...Packers defensive quality control coach Wendel Davis coached Bears LB Roquan Smith while serving as a defensive graduate assistant at Georgia during the 2016-17 seasons...Packers player personnel executive Lee Gissendaner played wide receiver at Northwestern from 1990-93...Packers president/CEO Mark Murphy was the athletic director at Northwestern from 2003-07...Former college teammates include: Bears DB Eddie Jackson and Packers DL Jarran Reed (Alabama); Bears DL Angelo Blackson and Packers S Rudy Ford (Auburn); Bears RB David Montgomery and Packers WR Allen Lazard (Iowa State); Bears DB Jaylon Jones and Packers G/T Royce Newman (Mississippi); Bears QB Trevor Siemian and Packers DL Dean Lowry (Northwestern); Bears QB Justin Fields and Packers C/G Josh Myers (Ohio State); Bears DB Jaquan Brisker and Packers T Rasheed Walker (Penn State); Bears TE Trevon Wesco and Packers CB Rasul Douglas (West Virginia).