ST. JOHN'S, NL / ACCESSWIRE / November 28, 2022 / Sokoman Minerals Corp. (TSXV:SIC) (OTCQB:SICNF) is pleased to report the following assay results from the ongoing 100,000 m Phase 6 program at Moosehead, as well as update on exploration in the vicinity of MH-22-463 which returned a 39.6 m intercept (core length) grading 12.50 g/t Au, including a higher-grade interval of 10.25 m grading 41.97 g/t Au from the Lower Eastern Trend. The mineralized zone in MH-22-463 is located approximately 100 m below the currently modeled mineralized shell for the Eastern Trend. Also released are 14 holes drilled along the northern perimeter of the Western Trend where geophysics (magnetics and historical IP) indicated the potential to expand the zone in that direction.

Drilling highlights from the Eastern Trend include:

Other holes reported today (full assay summary appended) confirm the continuation of the Eastern Trend to the north and down dip and drilling will continue in those directions. The drilling includes holes designed to extend the Eastern Trend to depth, as well as testing areas inferred to be within the Eastern Trend but where previously drilled holes are too widely spaced to confirm. The onset of freezing temperatures has forced an end to the barge-based program for 2022 but will resume in 2023. While the main focus of the barge program was the Eastern Trend and splays linked to it, it now appears that the recent intersection in MH-22-463 may be partially tested by holes drilled from the barge. Meanwhile, drilling to test the MH-22-463 area will commence today, with holes being collared from the western side of North Pond. Drilling at Moosehead will continue with two drills until the holiday break period which starts December 15, 2022.

Drill hole MH-22-463 reported (see September 6, 2022 news release one of the best intersections on the Moosehead Property to date, returning 39.60 m of 12.50 g/t Au including a 10.25 m section averaging 41.97 g/t Au. This represents the deepest, high-grade intersection to date at approximately 370 m down dip (300 m vertically). The Company has been reviewing all available information from the immediate area including televiewer data from the hole, combined with a visit from structural consultant, Dr. David Coller, who spent five days at Moosehead reviewing the core. Following his rigorous assessment of core and 3D modeling, Dr. Coller corroborates that the intersection in MH-22-463 represents a new and previously unrecognized gold occurrence in the footwall to the Eastern Trend. The intersection in MH-22-463 is complex, with the borehole intersecting at an oblique angle and crossing several gold-bearing intact veins and extensive mineralized vein breccia intervals. The interpreted westerly dip of this deeper level zone is new and opposite to the gold structures established at higher levels and is interpreted as either a high-grade linking structure or fold core-controlled breccia-vein zone.

Borehole MH-22-418, located 80 m to the northwest and also in the footwall of the Eastern Trend, intersected similar intact veins and vein breccia as MH-22-463, grading 4.14 g/t Au over 5.92 m from 388.84 m downhole including 1.31 m of 15.60 g/t Au. One scenario links these intersections with a shallow rake within a northwest-dipping plane that is best tested by drilling towards it from the west shore of North Pond. A second possible scenario (based on the current televiewer data) is for these similar high-grade intersections to be two of a series of new NE trending NW dipping zones. New televiewer data being acquired is aimed at improving the estimation of the strike trend to plan and optimize the drill test of the extent and continuity of this high-grade occurrence. True thickness and extent of the mineralization in MH-22-463 will require multiple drill holes from potentially different orientations. Up to this point, the Company has been targeting east-dipping structures like the Eastern Trend. This opens up a new structural orientation at the lower levels of the gold system that have not been targeted except for the early drilling in 2018/2019. These holes will also be completed using HQ-size core to provide a larger diameter hole for better televiewer accessibility and maximize sample size should visible gold be intersected.

A total of 14 holes were drilled around the northern limits of currently defined Western Trend. While intersecting favourable structures, most holes returned low values (see table), however, the structures remain open to the north where till and soil Geochem anomalies remain unexplained. The Western Trend is also open along strike to the south and down dip. The area will be reassessed over the holiday break for additional testing in 2023. The Western Trend, like all of the mineralized zones at Moosehead, hosts near-surface, high-grade gold such as previously reported in hole MH-18-08 that cut two zones, including; 1.05 m @ 207.5 g/t Au from 8.5 m downhole, and 2.28 m @ 42.36 g/t Au from 33.07 m downhole.

Tim Froude, President and CEO of Sokoman, says: 'We will soon be testing the area surrounding the intersection reported in hole MH-22-463. Dr. Coller's visit was timely and critical, and we now have the start of a new model that we feel strongly will deliver additional intersections. Drilling will commence immediately and we hope to have news before the holiday break in mid-December. The number of holes to be placed into the 463 area will be determined by the results we get as we drill them.

The barge-based program was not finished before year-end due to an earlier-than-expected freeze-up, therefore the program will be continued as early as possible in 2023. We have also just received a new magnetic interpretation for the project and combined with the deep seeking Alpha IP survey which is expected to commence imminently, will ensure we have the best, and most up-to-date package of data to work with moving forward. To date, we have completed 77,500 m in Phase 6 with approximately 1,050 samples outstanding at the lab representing all or parts of about 15 holes.' 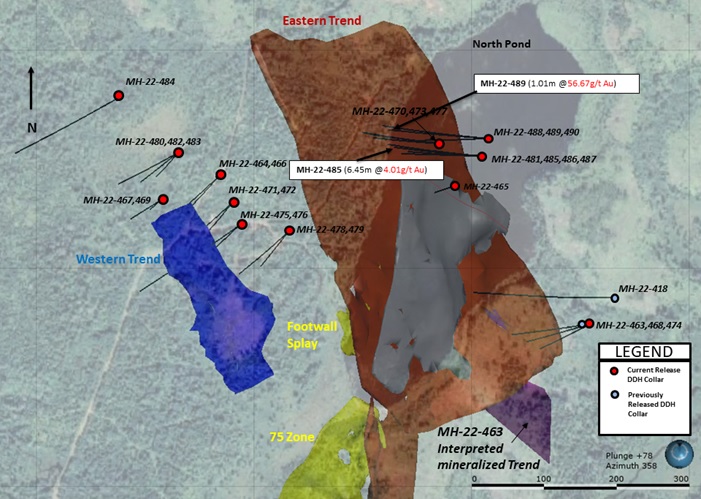 Drilling on the Moosehead Project to date has discovered five zones of gold mineralization, most containing visible gold, focused mainly on the Eastern Trend in the central portion of the property. Gold mineralization has been defined over a 600-m strike length and to 370-m down dip. The Company is well funded with more than $4.5 million in the treasury.

This news release has been reviewed and approved by Timothy Froude, P.Geo., a 'Qualified Person' under National Instrument 43-101 and President and CEO of Sokoman Minerals Corp.

Samples, including duplicates, blanks, and standards, were submitted to Eastern Analytical Ltd. in Springdale, Newfoundland for gold analysis. All core samples submitted for assay were saw cut by Sokoman personnel with one-half submitted for assay and one-half retained for reference. Samples were delivered in sealed bags directly to the lab by Sokoman personnel. Eastern Analytical Ltd. is an accredited assay lab that conforms to the requirements of ISO/IEC 17025. Samples with possible visible gold were submitted for total pulp metallics and gravimetric finish. All other samples were analyzed by standard fire assay methods. Total pulp metallic analysis includes: the whole sample is crushed to -10 mesh; then pulverized to 95% -150 mesh. The total sample is weighed and screened to 150 mesh; the +150 mesh fraction is fire assayed for Au, and a 30 g subsample of the -150 mesh fraction is fire assayed for Au; with a calculated weighted average of total Au in the sample reported as well. One blank and one industry-approved standard for every twenty samples submitted is included in the sample stream. Random duplicates of selected samples are analyzed in addition to the in-house standard and duplicate policies of Eastern Analytical Ltd. All reported assays are uncut.

Sokoman Minerals Corp. is a discovery-oriented company with projects in the province of Newfoundland and Labrador, Canada. The Company's primary focus is its portfolio of gold projects; flagship, advanced-stage Moosehead, Crippleback Lake (optioned to Trans Canada Gold Corp.) and East Alder (optioned to Canterra Minerals Corporation) along the Central Newfoundland Gold Belt, and the district-scale Fleur de Lys project in northwestern Newfoundland, that is targeting Dalradian-type orogenic gold mineralization similar to the Curraghinalt and Cavanacaw deposits in Northern Ireland. The Company also entered into a strategic alliance with Benton Resources Inc. through three, large-scale, joint-venture properties including Grey River, Golden Hope, and Kepenkeck in Newfoundland.

Sokoman now controls, independently and through the Benton alliance, over 150,000 hectares (>6,000 claims - 1500 sq. km), making it one of the largest landholders in Newfoundland, in Canada's newest and rapidly-emerging gold districts. The Company also retains an interest in an early-stage antimony/gold project (Startrek) in Newfoundland, optioned to White Metal Resources Inc., and in Labrador, the Company has a 100% interest in the Iron Horse (Fe) project which has Direct Shipping Ore (DSO) potential.

The Company would like to thank the Government of Newfoundland and Labrador for past financial support of the Moosehead Project through the Junior Exploration Assistance Program.

Investors are cautioned that trading in the securities of the Corporation should be considered highly speculative. Except for historical information contained herein, this news release contains forward-looking statements that involve risks and uncertainties. Actual results may differ materially. Sokoman Minerals Corp. will not update these forward-looking statements to reflect events or circumstances after the date hereof. More detailed information about potential factors that could affect financial results is included in the documents filed from time to time with the Canadian securities regulatory authorities by Sokoman Minerals Corp.