TORONTO, ON / ACCESSWIRE / November 28, 2022 / Signal Gold Inc. ('Signal Gold' or the 'Company') (TSX:SGNL) (OTCQX:SGNLF) is pleased to announce it has acquired a 100% interest in six (6) exploration licenses adjacent to the Goldboro Mineral Resource at its Goldboro Gold Project in Nova Scotia, Canada ('Goldboro', or the 'Project'). As a result, Signal Gold has increased its exploration license area from 599 hectares to 3,756 hectares (Exhibit A). This represents a significant milestone in the development of the Project as these exploration licenses cover the surface area which will be required for much of the Project's key infrastructure. It also adds further exploration opportunity along strike of the Goldboro Mineral Resource, as the additional licenses include the strike continuity of the host structure of the Goldboro Deposit, bringing the total known and prospective strike length to 7.5 kilometres (Exhibit B). 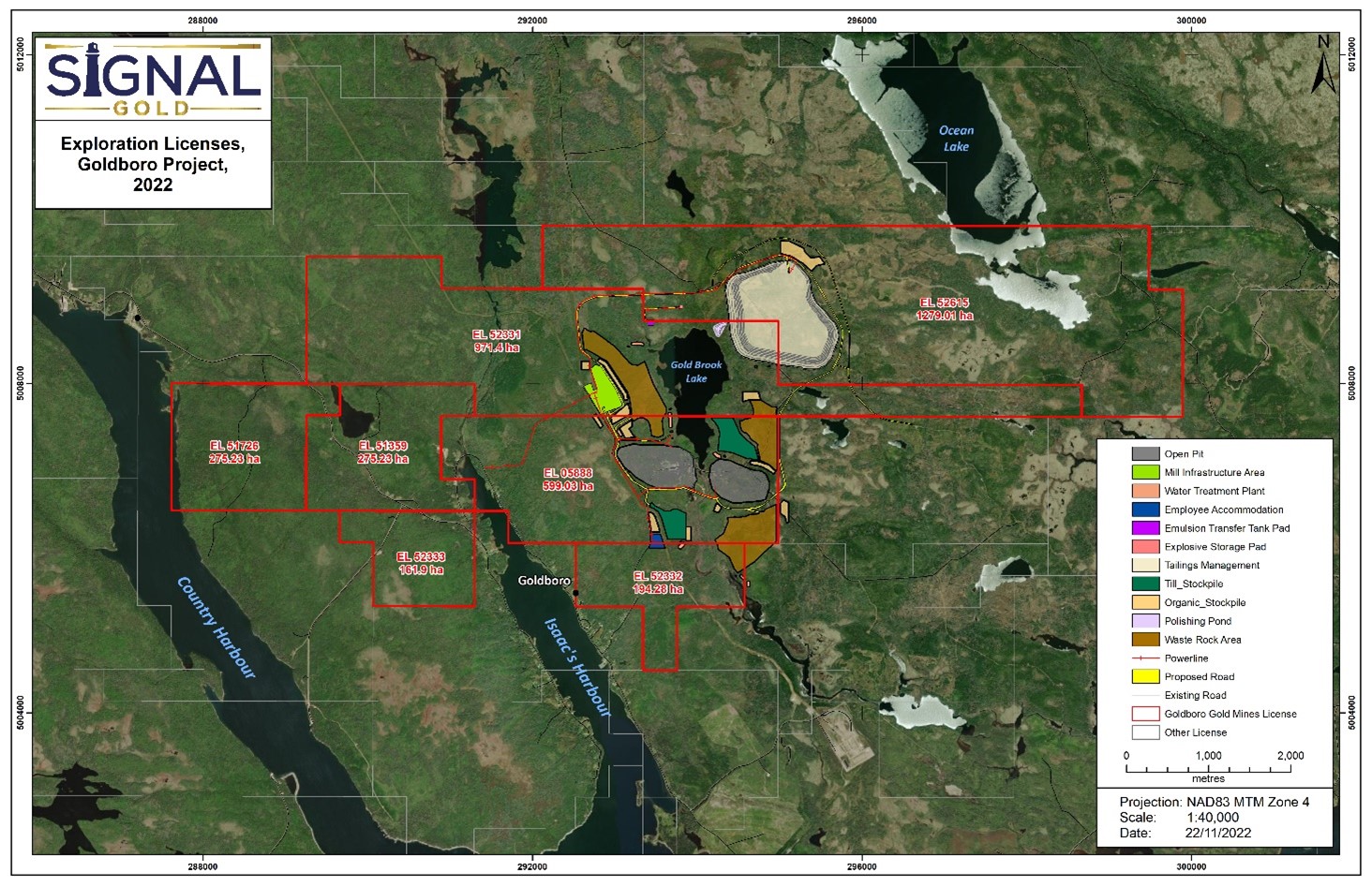 'This acquisition of these exploration licenses represents an important milestone in the development and growth of the Goldboro Gold Project, following on the heels the Environmental Assessment Approval received on August 2, 2022, and the recent commencement of exploration drilling to the west of the existing Goldboro Mineral Resource. These exploration licenses represent a significant increase in the Company's mineral property, which will be required for key infrastructure. Signal Gold now has a footprint that is over six times larger than it previously held, which includes an additional 3.2 kilometres of strike potential for a total of 7.5 kilometres of known and prospective strike length, providing a tremendous opportunity for further exploration upside and mineral resource growth.'

The Company acquired the exploration licenses from Meguma Gold Inc. for a total purchase price of $700,000, comprised of $400,000 in cash and $300,000 in common shares of Signal Gold at a deemed value of $0.333 per common share, based on the 20-day volume weighted average price as of November 16, 2022, resulting in the issuance of 900,901 common shares of the Company. The Company also granted to Meguma Gold Inc. a 1.0% royalty over the licenses acquired, capped at $1,000,000 of total payments, and assumed an existing 2% gross royalty which applies to five (5) of the exploration licenses acquired. 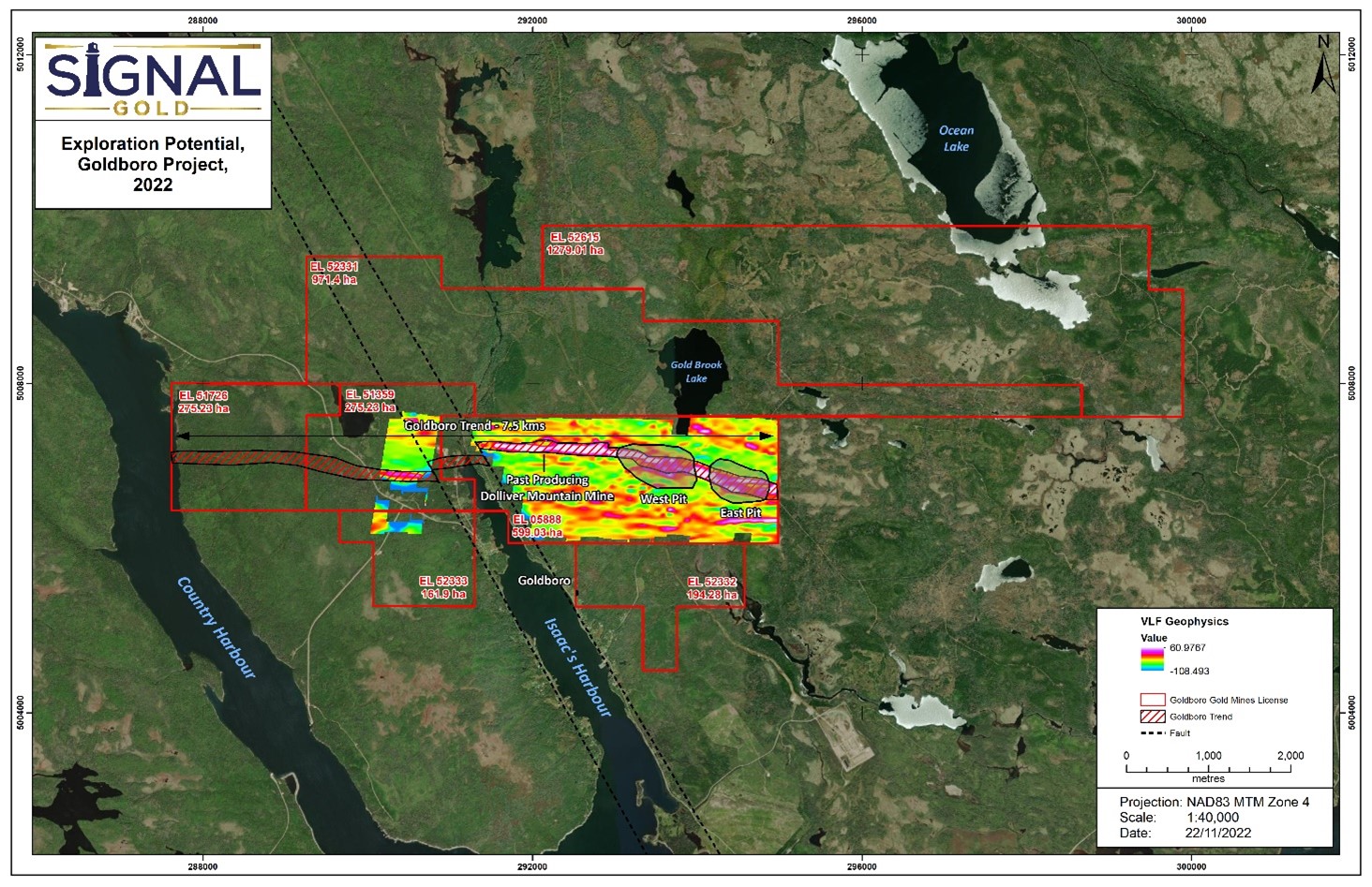 Exhibit B: Exploration potential of the Goldboro Trend showing the 7.5-km long conductor coincident with the Goldboro Mineral Resource.

Paul McNeill, P.Geo., VP Exploration with Signal Gold Inc., is a 'qualified person' as such term is defined in National Instrument 43-101 and has reviewed and approved the technical information and data included in this news release.

This news release contains 'forward-looking information' within the meaning of applicable Canadian and United States securities legislation, including the Company's future plans with respect to the exploration licences, results of the Feasibility Study, and Mineral Resource and Reserve estimates. Generally, forward-looking information can be identified by the use of forward-looking terminology such as 'plans', 'expects', or 'does not expect', 'is expected', 'budget', 'scheduled', 'estimates', 'forecasts', 'intends', 'anticipates', or 'does not anticipate', or 'believes' or variations of such words and phrases or state that certain actions, events or results 'may', 'could', 'would', 'might', or 'will be taken', 'occur', or 'be achieved'. Forward-looking information is based on the opinions and estimates of management at the date the information is made, and is based on a number of assumptions and is subject to known and unknown risks, uncertainties and other factors that may cause the actual results, level of activity, performance or achievements of Signal Gold to be materially different from those expressed or implied by such forward-looking information, including risks associated with the exploration, development and mining such as economic factors as they effect exploration, future commodity prices, changes in foreign exchange and interest rates, actual results of current production, development and exploration activities, government regulation, political or economic developments, environmental risks, permitting timelines, capital expenditures, operating or technical difficulties in connection with development activities, employee relations, the speculative nature of gold exploration and development, including the risks of diminishing quantities of grades of resources, contests over title to properties, and changes in project parameters as plans continue to be refined as well as those risk factors discussed in Signal Gold's annual information form for the year ended December 31, 2021, available on www.sedar.com. Although Signal Gold has attempted to identify important factors that could cause actual results to differ materially from those contained in forward-looking information, there may be other factors that cause results not to be as anticipated, estimated or intended. There can be no assurance that such information will prove to be accurate, as actual results and future events could differ materially from those anticipated in such information. Accordingly, readers should not place undue reliance on forward-looking information. Signal Gold does not undertake to update any forward-looking information, except in accordance with applicable securities laws.