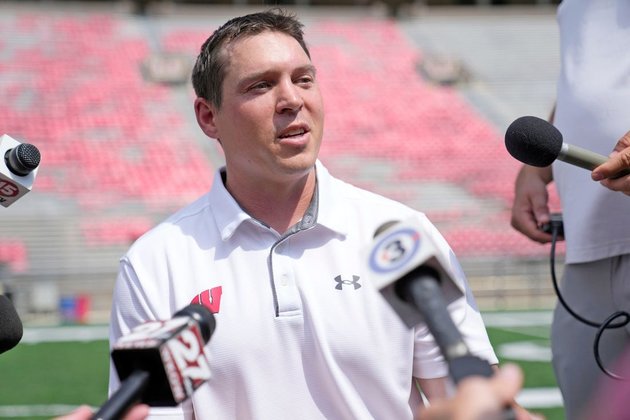 Wisconsin was a surprise addition to the early season flurry of coaching dismissals when Paul Chryst was let go on Sunday, but the Badgers may have a ready-made fill in to take the reins.

Defensive coordinator Jim Leonhard was named the interim coach and oddsmakers have installed him as the favorite to take over the job full time.

The former Wisconsin walk-on who went on to be named to three All-American teams has been one of the hottest names in the assistant coaching ranks. With the Badgers off to a 2-3 start overall and 0-2 in the Big Ten, athletic director Chris McIntosh decided to move on now -- perhaps in an effort to keep Leonhard in Madison long term.

Leonhard was installed as the 2-1 favorite by SportsBetting.ag to become the next Badgers coach. After going undrafted in 2005, Leonhard went on to forge a 10-year career in the NFL. He returned to Madison as the defensive backs coach in 2016 and was elevated to defensive coordinator the next year.

There are already five Power 5 openings, so the jockeying has begun for the top potential candidates.

Baylor's Dave Aranda and Kent State's Sean Lewis are among the other hot coaching candidates in the rumor mill.

"After a heartfelt and authentic conversation with Coach Chryst about what is in the long-term best interest of our football program, I have concluded that now is the time for a change in leadership," McIntosh said in a statement. "Paul is a man of integrity who loves his players. I have great respect and admiration for Paul and the legacy of him and his family at the University of Wisconsin."

WASHINGTON D.C.: Republican leader in the U.S. House of Representatives Kevin McCarthy said that he would form a select committee ...

US issues new rules for flying taxis, could begin operating in 2025

The Trial of the Chicago 7

Trial of the Chicago 7