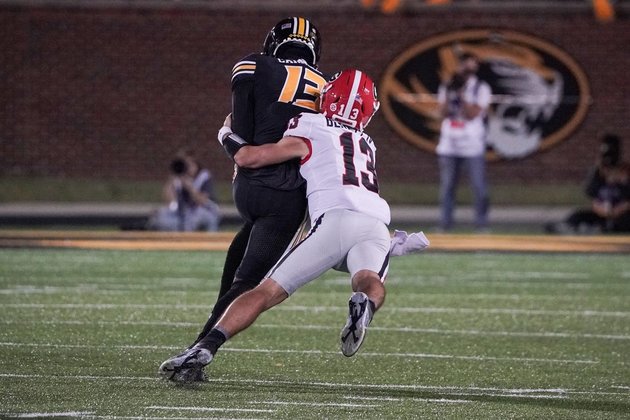 Daijun Edwards' 1-yard touchdown run late in the game lifted top-ranked Georgia to a 26-22 win over host Missouri in a game in which the Bulldogs rallied from a 10-point, fourth-quarter deficit on Saturday in Colombia, Mo.

Georgia quarterback Stetson Bennett went 24-for-44 for 312 yards with no touchdowns or interceptions. Kenny McIntosh rushed for 65 yards on 10 carries, and Kendall Milton had 61 yards and a touchdown on eight carries. Edwards finished with 11 carries for 49 yards for Georgia (5-0, 2-0 SEC).

Georgia kicker Jack Podlesny made all four of his field goals, while Missouri's Harrison Mevis was a perfect 5-for-5.

Missouri quarterback Brady Cook went 20-for-32 for 192 yards, with a touchdown and no interceptions. Cody Schrader had six carries for 89 yards while Dominic Lovett had six catches for 84 yards for the Tigers (2-3, 0-2), who lost for the ninth straight time to Georgia.

Trailing 16-6 at halftime, Georgia trimmed the lead on Podlesny's 22-yard field goal with 5:53 left in the third quarter.

Missouri matched Georgia on its next possession when Mevis connected on a 52-yarder with 4:31 left in the third quarter. Podlesny responded with a 29-yarder a little more than two minutes later to make it 19-12.

But less than a minute into the fourth quarter, Mevis connected from 56 yards to extend the lead to 22-12.

Georgia found the end zone on its ensuing possession, with Milton's 1-yard run capping a 75-yard drive with 9:39 remaining.

After Georgia forced Missouri to punt, the Bulldogs drove 68 yards in seven plays, with Edwards scoring from a yard out with 4:03 left for a 26-22 lead.

Missouri failed to get a first down on its ensuing possession and punted, giving Georgia the ball on its own 36-yard line with 3:02 left. The Bulldogs gained three first downs to run out the clock.

After Missouri took a 3-0 lead on Mevis' 41-yard field goal with 4:11 left in the first quarter, the Tigers found the end zone when Cook capped a nine-play, 81-yard drive with a 10-yard touchdown pass to Tyler Stephens for a 10-0 lead with 12:43 left in the half.

Missouri extended its lead to 13-0 on Mevis' 49-yard field goal on its next drive before Georgia countered with Podlesny's 41-yarder with 6:36 left in the half.

Missouri pushed its lead to 16-3 on Mevis' 22-yard field goal with 3:16 left in the half before Georgia cut the deficit to 16-6 when Podlesny connected from 34 yards out with one second left before halftime.