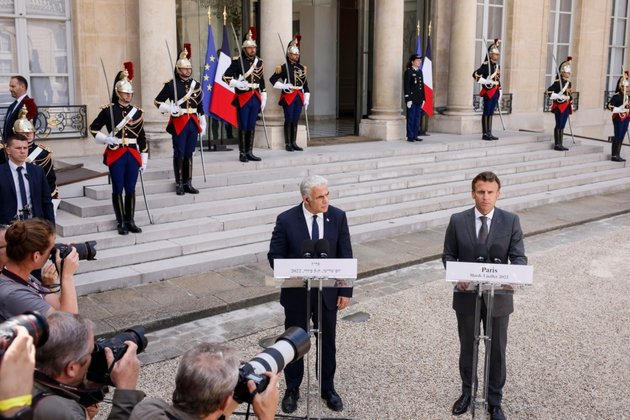 Paris - Israeli caretaker Prime Minister Yair Lapid on Tuesday used his first trip abroad since taking office to urge world powers to step up pressure on Iran over its nuclear activities, calling the Islamic republic a threat to regional stability.

Lapid met in Paris on Tuesday with French President Emmanuel Macron, who called on Lapid to revive talks toward peace with the Palestinians and said Israelis are "lucky" to have Lapid in charge.

Lapid, who took office Friday, focused on Israel's concerns about Iran's nuclear ambitions and the stalled global deal aimed at curbing them. Israel accuses Iran of trying to develop nuclear weapons - a charge Iran denies - and says the tattered nuclear deal doesn't include sufficient safeguards to halt Iran's progress toward making a bomb.

"The current situation cannot continue as it is. It will lead to a nuclear arms race in the Middle East, which would threaten world peace. We must all work together to stop that from happening," Lapid told reporters.

He and Macron, both centrists, called each other friends, but disagreed over the Iran nuclear deal.

The 2015 deal offered Iran relief from economic sanctions in exchange for curbs on its nuclear activities. In 2018, then President Donald Trump, with strong Israeli backing, withdrew from the deal, causing it to unravel. Since then, Iran has stepped up key nuclear activities, including uranium enrichment, well beyond the contours of the original agreement.

Macron called for a return to the 2015 deal, called the Joint Comprehensive Plan of Action, but acknowledged that it "will not be enough." France helped negotiate the deal and is one of the parties in talks aimed at trying to revive it. Israel says that if the agreement is restored, it should include tighter restrictions and address Iran's non-nuclear military activities across the region.

He said Israel and France "may have disagreements about what the content of the agreement should be, but we do not disagree on the facts: Iran continues to violate the agreement and develop its program, enriching uranium beyond the level it is allowed to and removing cameras from nuclear sites."

He heads the centrist Yesh Atid party and was one of the architects of the historic alliance of eight diverse factions that found common ground in opposition to Benjamin Netanyahu, the first governing coalition to include an Arab party.

Lapid will stay in office until the November election and perhaps beyond if no clear winner emerges. Making his first trip abroad as prime minister, Lapid may try to use the meeting with Macron to bolster his credentials as a statesman and alternative to Netanyahu with the Israeli electorate.

Macron used their meeting to urge efforts by Israel toward long-term peace with the Palestinians.

"There is no alternative to a return to political dialogue between Israelis and Palestinians," he said, to revive "a process that's been broken for too long."

Lapid didn't address Macron's appeal in their public remarks. Lapid, unlike Netanyahu, supports a two-state solution with the Palestinians. But as a caretaker leader, he isn't in a position to pursue any major diplomatic initiatives.

He and Macron were also expected to discuss Lebanon, days after Israel said it downed three unmanned aircraft launched by the Lebanese militant group Hezbollah that were heading toward an area where Israel recently installed an offshore gas platform. Hezbollah, which fought a month-long war against Israel in 2006, has confirmed sending the unarmed drones in a reconnaissance mission.

Israel and Lebanon don't have formal diplomatic relations, but they have been engaged in indirect U.S.-brokered talks to delineate their maritime border. France is a key supporter of Lebanon, a former French protectorate, and Macron has unsuccessfully tried to broker a solution to Lebanon's political crisis.

"Hezbollah has more than 100,000 rockets in Lebanon, aimed at Israel. It tries to attack us with Iranian rockets and UAVs," Lapid said, referring to unmanned aerial vehicles. "Israel will not sit back and do nothing, given these repeated attacks."