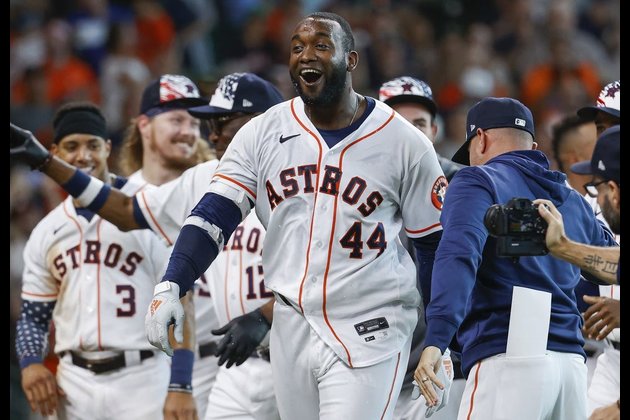 Yordan Alvarez clubbed a walk-off home run with two outs in the ninth inning as the Houston Astros capped a five-run rally by defeating the visiting Kansas City Royals 7-6 on Monday.

Alvarez drilled a 3-1 slider from Royals closer Scott Barlow (2-2) to right-center field for his 24th home run. It marked the second consecutive walk-off win for Houston, winners of 12 of 14.

Garrett failed to record an out, issuing back-to-back walks before Kyle Tucker lined a two-run single to center that scored Pena and Alvarez and sliced the deficit to 6-5. Astros first baseman Yuli Gurriel then greeted Royals reliever Taylor Clarke with a game-tying RBI single.

The Astros' rally negated a multi-homer game for Royals catcher MJ Melendez, whose second homer of the game and eighth this season gave Kansas City a 6-3 lead in the top of the eighth.

Astros right-hander Jake Odorizzi endured a rocky return to the rotation following a 42-game absence tied to a lower left leg tendon strain. Odorizzi had pitched splendidly over his prior four starts prior to sustaining the injury at Boston on May 16, going 3-0 with a 0.79 ERA.

He found trouble almost immediately against the Royals, surrendering consecutive singles to Bobby Witt Jr. and Vinnie Pasquantino after issuing a one-out walk to Andrew Benintendi. Hunter Dozier followed with a two-run single the opposite way to right for a 2-0 advantage.

The second inning nearly mirrored the 36-pitch first for Odorizzi, who surrendered a leadoff infield single to Michael A. Taylor two batters before Whit Merrifield delivered a double that advanced Taylor to third. Benintendi added a two-run single that doubled the Royals lead to 4-0.

Odorizzi completed four laborious innings but not until he surrendered the first Melendez homer and consecutive one-out singles in the fourth. He threw 90 pitches, 58 for strikes, while allowing a season-high five earned runs on a season-high nine hits plus one walk with three strikeouts.