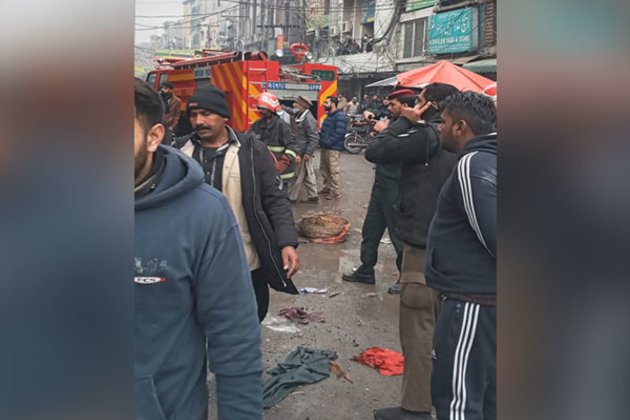 Lahore [Pakistan], January 24 (ANI): Pakistan Police failed to track down the terrorist involved in the bomb blast in Anarkali market in Lahore on Thursday as the CCTV cameras of the Punjab Safe City Authority were found to be dysfunctional, reported DAWN.

A law enforcement official regretted, "We were hopeful that the man who planted a bomb at the heavily crowded Pan Mandi of Anarkali would be tracked down through the PSCA cameras which would help resolve the high-profile case."He said that the suspect was detected in privately installed cameras in Anarkali. However, he went out of the radar because of the offline CCTV cameras of the Punjab Safe City Authority.

Notably, an unidentified man placed high-intensity explosives weighing between one and 1.5 kilograms in Lahore's Anarkali area which caused Thursday's blast leading to the death of three people and injuring 26, reported local media.

The official further said, "This situation is disappointing for the high command of the LEAs during high-profile meetings which were exclusively convened in the wake of the Anarkali terrorism case,".

"Only 30 per cent of cameras have been offline in Lahore for long," PSCA Chief Executive Officer (CEO) DIG Kamran Khan told the newspaper.

The officer holds charge of multiple assignments in the Authority and the cameras have not been functioning for the last two years or so during his tenure in the project, reported DAWN.

The official source rebuked the authority for being unable to do anything on the issue.

He said that out of 101 4G towers, two were completely down and most were without the backup facility.

"That means when electricity is out the 15 calls can't be passed to the police due to the weak 4G signals," he said.

He further pointed out that PSCA faced the worst time when rains recently hit Lahore. During that time 92 4G towers went offline because of a lack of backup.

PUCAR-15 which receives emergency 15 calls from all over Punjab is facing problems as seven computer systems are out of order, he added.

He mentioned that "The remaining 33 systems have broken headphones and some have no headphones at all", reported the newspaper. (ANI)