CAT Strategic Metals Corp. Announces Completion of Detailed Review by WGM of its Large South Preston Uranium Exploration Property on the SW Margin of the Athabasca Basin, with Recommendations for Further Exploration

VANCOUVER, BC / ACCESSWIRE / January 11, 2022 / CAT Strategic Metals Corporation (CSE:CAT) ('CAT' or the 'Company') is very pleased to announce that the consulting firm Watts, Griffis and McOuat Ltd. ('WGM') of Toronto has completed an independent review of extensive historical and recent exploration data concerning areas on or adjacent to CAT's 206.8 km2 South Preston uranium exploration property located near the south-western margin of the Athabasca Basin in Saskatchewan, and east of recent discoveries by Fission Uranium and NexGen Energy (Figure 1). 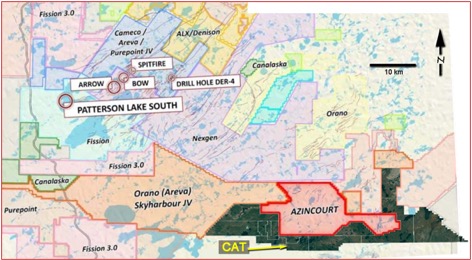 Figure 1: The CAT dispositions measuring 57 km from west to east are shown with a Google Earth image fill in the lower right corner of the view. The uranium deposits in the Patterson Lake Corridor are shown at upper left. The dispositions of other exploration companies are also shown.

This review was based on the voluminous exploration assessment records filed with the Saskatchewan Ministry for Energy and Resources, with details, conclusions and recommendation provided in a report delivered to CAT in early January.

Based on its comprehensive review, WGM has concluded that further systematic exploration of the CAT dispositions is well justified by the following:

The results of the review have provided a foundation for the design of CAT's planned 2022 winter and summer uranium exploration programs, which are subject to regulatory approval and consultations with the local community represented by Clearwater River Dene Nation ('CRDN') management. It has also allowed for improved specifications of geochemical, geological and geophysical surveys.

In terms of historical exploration beginning in the late 1960s, portions of the CAT exploration property were covered by various airborne and ground surveys. The exploration during much of that period was narrowly focused on areas covered by the Athabasca Formation that was deemed to be an essential component of the uranium deposit model. This overlooked the fact that the current area covered by the Athabasca sediments is substantially smaller than what it was during the Proterozoic when uranium deposits were forming. Fission Uranium's recent discovery at Patterson Lake South, much like Gulf Mineral's original 1967 Rabbit Lake discovery, lies outside the area of sandstone cover, indicates that areas of basement exposure where the Athabasca has been removed through erosion have significant potential for unconformity deposits. In that regard, the CAT property lies a short distance south of the unconformity with an outlier of Athabasca sandstone mapped on the eastern portion of the property indicating that, in the CAT project area, the basement rocks are located very close to the original unconformity. Accordingly, they are within what would be considered to be a favourable setting for mineralization.

A variety of airborne geophysical surveys conducted over the past 50 years has covered portions of the present CAT dispositions, providing useful but incomplete radiometric, magnetic and EM coverage. CAT's planned exploration program includes airborne geophysical surveying of favourable sectors lacking effective prior coverage. In particular, recent airborne radiometric surveying by Athabasca Nuclear Corp. during 2014 in the western portions of the CAT property indicated the presence of large areas of high background radioactivity on-strike with Azincourt's very recently discovered A-G zone, a series of SW-trending electromagnetic ('EM') conductors. Azincourt's drilling of 7 holes demonstrated that the conductors are related to graphite-bearing shears in metasedimentary basement rocks. There is a reasonable expectation that this geological setting will be traced SW onto the CAT property in the general vicinity of the aforementioned radiometric anomalies, and close to a site where previous exploration has reported high total count radioactivity in bedrock, reportedly 13X to 20X background.

In the eastern portion of the CAT property, several NNE to ENE-trending EM conductors detected in prior surveys occur in an area that is underlain by the current position of the Athabasca unconformity. A 1x2 km outlier of Athabasca sandstone, elongated NE-SW, is reported at the NE tip of Silvius Lake. A NNE-trending conductor was detected in a 1969-70 airborne EM survey, which is associated with several favourable factors: (1) graphitic metasediments have been reported in this area of the CAT property; (2) several stream sediment geochemical anomalies are present and two small downstream lakes also have bottom sediments that are anomalous in uranium; (and, 3) a radioactive mineral described as a 'yellow flaky radioactive mineral resembling uranophane' was reported in graphitic metasediments producing radiometric signatures up to 1,250 cps on a scintillometer, or greater than 60X background. Surprisingly, the report by Denison Mines Ltd. in 1978 lacks any mention of bedrock sampling or analysis.

Based on its evaluation, WGM has proposed an integrated systematic exploration program extending over a 9-month period that is based on a well-proven approach updated to take advantage of recent technical advances. Exploration would be initiated by a radon-in-water and lake-bottom sediment survey of the approximately 100 lakes in the project area during the late winter. An airborne EM-magnetometer survey totalling approximately 800 line-kilometres plus a separate high-resolution airborne radiometric survey is also proposed to cover areas identified as having higher potential that have not been effectively surveyed in the past. A proposed 3-month summer program is also in the planning stages, the details of which will depend on the outcome of the initial surveys. Geological mapping, bedrock sampling and prospecting to confirm the previous results will be fundamental components of that program. Biogeochemical sampling of black spruce trees, a technique proven to be effective over the former Key Lake uranium mine, may also be considered in the summer program. Contingent on the results, this initial phase could be followed by a winter drilling program to test identified targets.

CAT management and its consultants are aware of the various permitting processes needed to be followed in initiating exploration, including meaningful consultation with local First Nations and other stakeholders. Prior to the Christmas break, CAT initiated a dialogue with the Clearwater River Dene Nation to ensure the local community is well-informed and to allow feedback concerning the company's exploration plans. CAT will be engaging with CRDN representatives to foster co-operation and the engagement of local service providers to the maximum extent possible. With the exploration program now reasonably defined, CAT is now initiating its application process with the relevant ministries of the provincial Government to seek approval for its project components and undertaking more sustained dialogue with CRDN management.

CAT CEO, Robert Rosner, stated that 'The report provided to the board of directors by our consultants, WGM, was not only exceptionally comprehensive but also extremely encouraging from a potential exploration perspective. Their review of all the historical data associated with our South Preston property, coupled with more recent results from ongoing work by other mining companies in the area, suggest that South Preston may be much more significant than we first thought. As a result of this, CAT is quite excited to take the next steps to ensure the implementation and success of our potential and planned exploration program as soon as is practicable. This includes prioritizing ongoing discussions about our evolving plans with First Nations stakeholder CRDN to capitalize on this exciting project.'

The technical content of this news release has been approved by Al Workman, P.Geo. (Saskatchewan and Ontario), Vice-President of WGM and a Qualified Person as defined under Canadian securities rule National Instrument 43-101. Mr. Workman's uranium exploration experience is extensive, including work in the 1970s on the Collins Bay deposits, and since that time experience in a wide variety of geological settings globally.

CAT Strategic Metals' overall Mission Statement and corporate strategy is to source, identify, acquire and advance property interests located in mineral districts proven to have world class potential, primarily for gold and copper. In addition to the South Preston Uranium Project, CAT's Burntland Project is focused on the exploration and development of several targets located Northeast of Saint Quentin in the county of Restigouche, New Brunswick, Canada, and The Rimrock Gold mineral property is a low-sulfidation and Carlin-style gold-silver prospect in the heart of the main Carlin and Northern Nevada Rift gold-silver mining belts of northeastern Nevada. CAT's shares trade on the Canadian Securities Exchange (CSE) under the trading symbol 'CAT', and on the Frankfurt Stock Exchange under the symbol '8CH'.

ON BEHALF OF THE BOARD

This news release may contain forward-looking statements. Forward-looking statements address future events and conditions and therefore involve inherent risks and uncertainties. Actual results may differ materially from those currently anticipated in such statements. Particular risks applicable to this press release include risks associated with planned production, including the ability of the company to achieve its targeted exploration outline due to regulatory, technical or economic factors. In addition, there are risks associated with estimates of resources, and there is no guarantee that a resource will be found or have demonstrated economic viability as necessary to be classified as a reserve. There is no guarantee that additional exploration work will result in significant increases to resource estimates. Neither Canadian Securities Exchange nor its Regulation Services Provider (as that term is defined in policies of the Canadian Securities Exchange) accepts responsibility for the adequacy or accuracy of this release.