No. 8 Kansas back in flow with visit from UTEP ahead 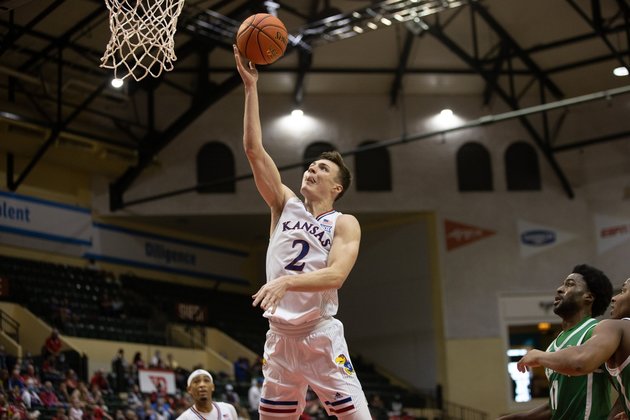 Toughness has long been an essential attribute coach Bill Self wants to see in his Kansas teams.

Sometimes, however, the high level playmaking ability possessed by the No. 8 Jayhawks obscures some of those hard-nosed ideals, though they are beginning to show their mettle entering a matchup Tuesday against UTEP in Kansas City, Mo.

Two authoritative differentials of 18 stood out in a 95-75 nonconference victory Friday at St. John's as Kansas (6-1) claimed a 47-29 rebounding advantage and had a 24-6 margin in second-chance points.

Although it was Kansas forward David McCormack who recorded his first double-double of the season (15 points, 13 rebounds), the Jayhawks' ability to pound the glass also reflected the aggressiveness of their guards.

In particular, Kansas guard Christian Braun has demonstrated such instincts. Not only did Braun score a career-high 31 points at St. John's, he also grabbed eight rebounds for the fourth time this season. His 7.2 rebounding average leads the Jayhawks.

"He does a little bit of everything, a lot of everything," Self said of Braun. "He's a good rebounder and obviously he can shoot the ball and he's strong and can finish around the rim. So, he's a good player and he's playing the best he's played since he's been here with us."

Braun recognized that his first two seasons with the Jayhawks, though impressive, did not showcase all his traits. During the offseason, he worked on becoming a more complete player. He also leads the Jayhawks in steals and ranks second in assists, while shooting a team-best 61.6 percent.

"Coming in, I wasn't just a spot-up shooter and that's kind of what I turned into," said Braun, who was a highly-regarded in-state recruit. "But I know that if I'm aggressive that stuff will open up."

Ochai Agbaji leads Kansas with a 22.6-point average. He scored 23 against St. John's.

UTEP (4-3) fell 72-69 at home on Friday to New Mexico State, succumbing to a 3-pointer with 1.6 seconds remaining. The Miners battled back from a 10-point deficit while shooting 41.7 percent, a tick under their season average of 41.8 percent.

"We kept fighting, kept competing," said first-year UTEP coach Joe Golding. "We weren't as efficient as we wanted to be, but the bottom line is we couldn't get enough stops."

Souley Boum and Jamal Bieniemy provide a one-two punch for the Miners, averaging 19.8 and 16.0 points, respectively. UTEP carries a rebounding edge on their opponents of 35.4 per game to 32.0.