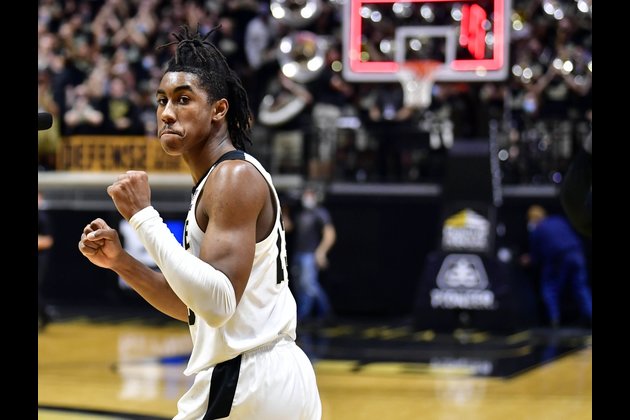 Jaden Ivey scored a game-high 19 points and Trevion Williams recorded 13 points and 18 rebounds as No. 2 Purdue topped Iowa 77-70 on Friday night in West Lafayette, Ind., in the Big Ten opener for both schools.

Purdue (8-0, 1-0 Big Ten) remained unbeaten while sending Iowa (7-1, 0-1) to its firstloss of the season. Patrick McCaffery paced the Hawkeyes with 15 points, while Tony Perkins (14) and Kris Murray (12) followed in double figures.

Ivey starred throughout, shooting 7-for-13 and providing a handful of booming dunks that sent the home crowd into a frenzy. He contributed eight points, three rebounds and a steal to a tide-turning, 13-3 run in the second half that helped the Boilermakers climb ahead by as many as 19.

Christian Bishop scored 17 points off the bench as the Longhorns rode a dominating early-second-half surge to their fifth straight win, a blowout of the Vaqueros in Austin, Texas.

Tre Mitchell and Timmy Allen added 13 points each for Texas (6-1) while Marcus Carr had 11. The Longhorns outscored the Vaqueros 42-17 in the second half, shot 50.8 percent overall and forced 22 turnovers.

Braun went 10 for 16 while helping the Jayhawks (6-1) weather a rally by the Red Storm (5-2) early in the second half. Ochai Agbaji added 23 points for Kansas, and David McCormack notched his first double-double of the season with 15 points and 13 boards.

After trailing by 13 at halftime, St. John's rallied to within 62-59 as Julian Champagnie nailed his first five 3-pointers of the second half. Champagnie posted team highs of 24 points and eight rebounds.

The host Cougars had little trouble with the Bulldogs.

Houston (7-1) had five players score in double figures and shot 62 percent from the field. The Cougars also shot 43.5 percent from the 3-point mark, hitting 10 of 23 attempts, and 81.3 percent from the free throw line. Tramon Mark had a game-high 22 points, Josh Carlton had 17 and Fabian White Jr. added 16. Kyler Edwards totaled 12 points and 10 rebounds, and J'Wan Roberts grabbed 12 boards.

Bryant (3-5) entered the game off a 63-61 overtime loss to Dartmouth, its previous lowest point total of the season. Chris Childs led the Bulldogs with 13 points, and Charles Pride scored only two points on 1-for-10 shooting, well below his 14.9 scoring average entering the game.