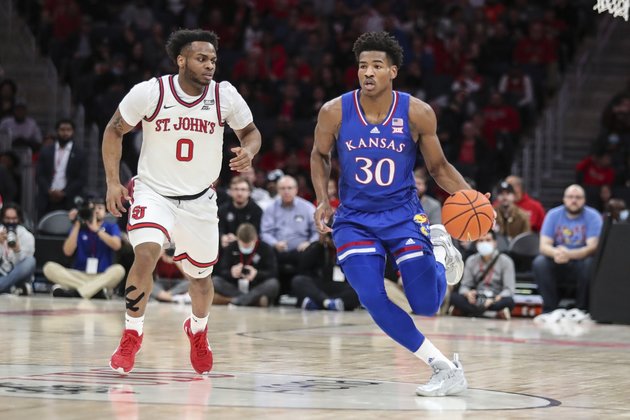 Braun, coming off an all-tournament showing at the ESPN Events Invitational, went 10 for 16 while helping the Jayhawks (6-1) weather a rally by the Red Storm (5-2) early in the second half.

Ochai Agbaji added 23 points for Kansas. David McCormack also notched his first double-double of the season, posting 15 points and 13 rebounds in the Jayhawks' first true road game of the year. The Jayhawks, who came in as the top shooting team in the Big 12, shot at a 48.6 percent clip in this one.

After trailing by 13 at halftime, St. John's rallied to within 62-59 as Julian Champagnie nailed his first five 3-pointers of the second half. Champagnie posted team highs of 24 points and eight rebounds.

However, the Red Storm went cold down the stretch, missing 10 straight shots and allowing the Jayhawks to pull away.

The icy spell eventually got to St. John's coach Mike Anderson, who stormed on the floor to protest what he thought was a goaltend with 3:45 left and was slapped with a technical.

Braun added nine first-half points for Kansas, while Alexander led St. John's with 10, though the Red Storm shot just 41.7 percent and made just 2 of 10 shots from behind the arc.

The basketball game was the first played at UBS Arena on Long Island, the new home of the New York Islanders.