Spotlight on David McCormack as No. 8 Kansas visits St. John's 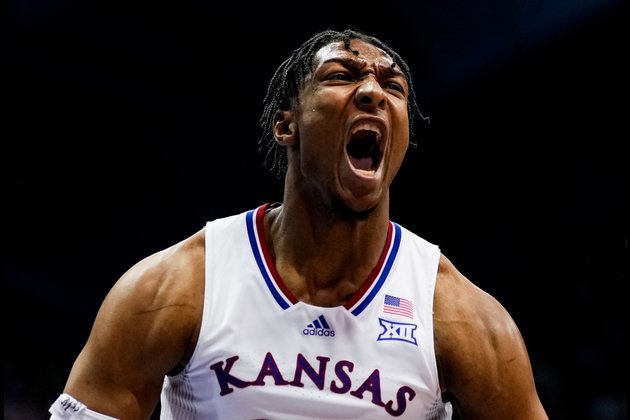 As the reigning Most Improved Player in the Big 12, everything pointed to a strong season for David McCormack of No. 8 Kansas.

Named to the All-Big 12 preseason team, the forward figured to be the cog in the middle for the Jayhawks. Instead, his contributions have dipped and his minutes have declined for Kansas (5-1) heading into Friday night's Big 12-Big East Battle against St. John's (5-1) in Elmont, N.Y.

McCormack may be on an uptick, if a 14-minute outing from a starter could ever be called such. He had 13 points on 4-of-6 shooting and five rebounds as Kansas claimed third place in the ESPN Events Invitational by downing Iona on Sunday.

"I think (McCormack's play) was better than it has been," Kansas coach Bill Self said. "I still don't think that he's rebounding or playing to his presence at all, but I think it was better. At least he saw the ball go in the hole a little bit."

Surrounded by several agile guards and wings who give the Jayhawks athleticism, speed and firepower, McCormack often seems to slow the attack and has looked indecisive.

Teammates have exhorted him to be more assertive while trying to instill confidence. McCormack averages 8.2 points and ranks third on the team behind two guards, Christian Braun and Remy Martin, in rebounds (5.2). His average minutes, 18.7, are both an indication of his ineffectiveness and Self's willingness to try different combinations while assessing a deep roster.

"Everybody knows what he can do," Braun said. "So, once he gets his legs under him and gets back to being him, being confident, he'll be great."

Ochai Agbaji leads Kansas with a 22.5-point average. Braun (13.8) and Martin (12.0) are the only other Jayhawks scoring in double figures. Ten contributors average nine-plus minutes.

Joel Soriano, who will battle McCormack underneath in the clash against Kansas, scored a quick five points in overtime and finished with a team-high 16 points and nine rebounds to pace the Red Storm. Posh Alexander, coming off a lower leg strain, also scored 16 points, with seven assists and four steals.

"At some point, things have to click," said Julian Champagnie, who recorded his second double-double and leads St. John's in scoring (21.3) and rebounding (6.8). "If we're going to reach the goals that we're striving for, we have to win games."

While disappointed in his team's "grit," St. John's coach Mike Anderson saw positives in the OT surge. He also alluded to criticism of his team's schedule, which has included just one big-name test until now, a 76-74 loss at Indiana.

"I get a kick out of guys talking about the schedule," Anderson said. "Everybody's got players, but some of these guys who make these statements (about scheduling) never played the game before. Not only that, now you have the transfer portal. ... Every game is a big game to me."