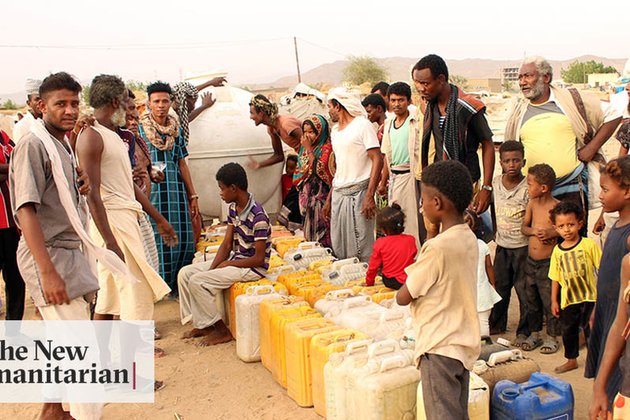 Nearly six months after a much-publicised deal was made in Sweden to bring an end to four years of war and the resulting humanitarian crisis in Yemen, the UN now says Houthi fighters have pulled out of the Red Sea port city of Hodeidah.

Good news? Take a closer look: many Yemenis, including the internationally recognised government claim that reports of a unilateral withdrawal are no more than a Houthi PR stunt and a short-term smokescreen for a stalled UN-led peace process.

The limits of what has been achieved are clear from the words of the UN's special envoy to Yemen, Martin Griffiths, and by the fact that renewed clashes have erupted in Hodeidah between Saudi-backed pro-government forces and the Houthi rebels.

"Yemen remains very much at the crossroads between war and peace," Griffiths told the UN Security Council on Wednesday. "The ease with which progress can be reduced or removed is indeed frightening. Progress can be made, progress can be threatened."

If the withdrawal has really happened, it is no doubt a positive step, especially given the long stalemate since representatives of the Houthis and the government of President Abd Rabbu Mansour Hadi met in Sweden in December. But there's no cause for celebration just yet.

For starters, the agreement stipulated that forces from both sides would be "mutually" redeployed from Hodeidah's city and ports in a process arranged and monitored by a UN-led Redeployment Coordination Committee. The security for the city and ports (Hodeidah itself and two smaller ports in the same province, Saleef and Ras Issa) would then be handed over to "local security forces" - the definition of which was to be agreed on by both sides.

But the Houthi withdrawal was a unilateral move, albeit one verified by the UN. It was from the ports alone, not the city or the wider province. It was not negotiated by the committee. And, according to sources on the ground, security for the ports has been handed over to the Coast Guard, which is now largely made up of Houthi-allied personnel. A letter from Hadi's government submitted to the Security Council on 13 May - not yet made public - "affirms [the government's] right to check the list of Coast Guard members taking over the ports after the withdrawal of the Houthis".

This is why Hadi's government decries the move as nothing more than a sleight of hand, with the Houthi military effectively changing into Coast Guard uniforms - the "local security forces" - but with no real withdrawal to speak of.

The UN, either desperate to show any progress on the ground, or hoping the symbolic move would break the deadlock and snowball into something real, may have oversold the withdrawal as significant progress towards peace and the much-needed delivery of aid.

Griffiths insisted at the Security Council on Wednesday that the UN could now play a greater role in running Hodeidah port. However, a three-day meeting to discuss the financial aspects of the Hodeidah deal in the Jordanian capital, Amman, ended on Thursday with no further details disclosed, only that "candid and constructive discussions" had been held.

Even if all fighters left Hodeidah city, it would still be a limited step towards stability in one part of the country. If this happens, getting aid and commercial imports flowing to the people who depend on it isn't just about restoring the ports' capacity and running them independently and efficiently. It's also about getting aid across lines of control, which means securing humanitarian corridors beyond Hodeidah, where aid is often hindered and taxed at multiple checkpoints.

All that aside, the hype and focus on Hodeidah and its ports is masking the bigger picture. Even if this week's withdrawal and the deal as a whole represent a breakthrough, they still don't address the root causes of Yemen's conflict, nor are they replicable in Yemen's other 21 provinces, where the war rattles on.

A unique combination of economic and military interests and incentives led to the agreement in Sweden. It's a recipe that can't be easily reproduced elsewhere, and if by some miracle the UN does pull off the Hodeidah deal, it will have a long way to go before the warring parties start negotiating seriously about the rest of the country, especially in difficult key governorates such as Taiz and the capital, Sana'a.

There are many challenges, shortcomings, and plenty of blame to go around. Though prospects are grim, that's not to say all hope is lost. The UN-led process remains to be the best vehicle for peace. But the international community and Yemen-watchers alike would do well to curb their enthusiasm over the latest moves in Hodeidah, keep their expectations in check, and work harder to develop a solid framework for peace in the whole country.

Moreover, and more importantly, the Yemeni stakeholders will do well to buy into the process and show goodwill.

Unfortunately, the Yemeni parties, often too quick to adopt hardline stances and criticise any progress, are better at shooting down solutions than proposing them. Ultimately, no solution will work if not locally and mutually accepted. It is the responsibility of Yemenis to put their differences aside and make the necessary effort and compromises towards securing peace.

WASHINGTON, DC - The U.S. government has filed a forfeiture complaint and warrant against four Iranian vessels travelling to Venezuela ...

Some 120,000 members of the U.S. National Guard have responded this year to natural disasters - floods in Michigan, wildfires ...

India's Navy repatriates 687 citizens who were stranded in Iran

CANBERRA, Australia - We now know just how massive the fastest-growing black hole in the universe actually is, as well ...

SYDNEY, Australia - Stocks in Asia extended gains on Friday as strong payrolls data out of the U.S. and a ...

Axis Bank to wind down and close operations in Britain

MUMBAI, Maharashtra, India - Private sector lender Axis Bank is fully winding down and closing operations of its subsidiary in ...

Sonalika confirmed as No. 1 exporter of tractors in India

HOSHIARPUR, Punjab, India - Not only has the company set the pace, it has reported its highest monthly sales ever. ...