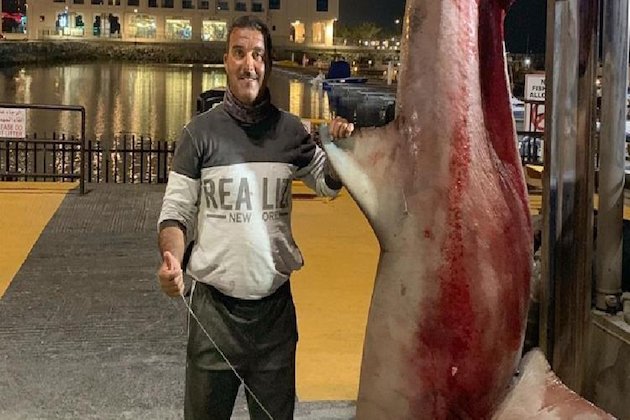 FUJAIRAH, UAE - Fisheries inspectors are investigating the capture and killing of a mega bull shark in the seas off the northeast of the United Arab Emirates.

He went out after the shark and hunted it down because he says it was raiding their catches.

The news made headlines however this also caught the attention of the fishing authorities, concerned that the species is protected during a five month period, which is maintained each year, and the capture took place during this period.

"It was the only way to stop it," Mr Suleiman told the UAE-based newspaper The National. "Many fishermen were complaining about its behaviour and that made me decide to hunt it down."

"I prepared a very strong fishing line, a big hook and live bait. I didn't expect it to be as big as it was but the fishermen were glad I managed to catch it."

Conservationists are up in arms over the culling of the shark, particularly as the shark was pregnant. Fifteen embryos were discovered in the shark's womb.

Suleiman could have his fishing license suspended for 6 months, however there is a coimplication.

The Ministry of Climate Change and Environment, said the shark was caught between the February 1 to June 30 ban announced last year. The period coincides with the sharks' breeding season.

However, a change to the rules this year saw the ban reduced by a month and changed to run from March 1 to the end of June.

The problem for Mr Suleiman is the new regulations only come into force in March.

When this writer recently looked into the mirror and took a good look at how long his hair had grown ...

How London's 100 or so billionaires are faring

Over cups of tea in his ramshackle London home I chatted with a novelist. It felt a valuable opportunity, given ...

Are the Golden Days over?

As lockdown measures start to be eased in most countries around the world, the experts of The Conversation's global network ...

CANBERRA, Australia - Australian Federal Police said Wednesday they were dropping an investigation of a prominent journalist who obtained classified ...

NEW YORK, New York - U.S, stocks ran out of steam on Thursday with fears about the worsening U,S.-China relationship ...

Chinese city of Nyingchi to see wave of new development

LHASA, May 27 (Xinhua) - Construction has begun on 40 key projects in the city of Nyingchi, southwest of China's ...