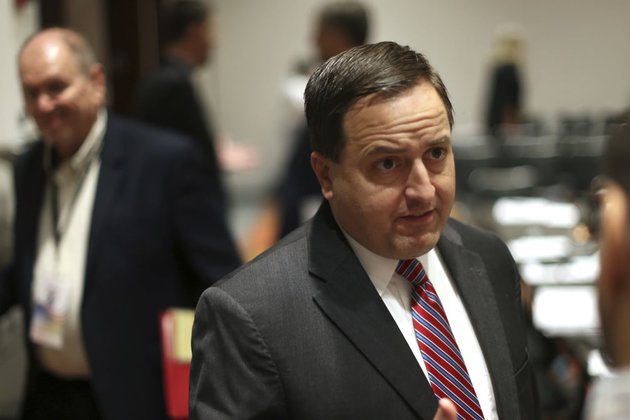 JEFFERSON CITY, MO. - Missouri's top election official on Thursday said the state was appealing a judge's ruling that blocked enforcement of parts of a voter photo identification law, adding that the ruling was causing 'mass confusion'' ahead of a key election for a U.S. Senate seat.

Republican Secretary of State Jay Ashcroft in a statement said the state attorney general had appealed the ruling and asked it to be put on hold as that process plays out.

At issue is Senior Cole County Circuit Judge Richard Callahan's recent ruling striking down a requirement that a voter lacking a valid photo ID must sign a sworn statement and present some other form of identification in order to cast a regular ballot. Callahan also blocked the state from advertising that a photo ID is required to vote.

Ashcroft said there's confusion because Callahan's ruling 'directs the STATE not to use the statement.'' But Ashcroft said it's local election authorities who would have been responsible for requesting that voters without proper photo identification sign an affidavit, 'so it is not clear if they are bound by the judge's decision.''

'The judge's decision has injected mass confusion into the voting process just weeks before an important election - an action the courts historically and purposely have not taken,'' Ashcroft said, adding that many local election authorities already had trained poll workers to require voters to sign sworn statements.

Callahan's ruling came as voters are preparing for a Nov. 6 election headlined by the race between Democratic U.S. Sen. Claire McCaskill and her Republican challenger, Attorney General Josh Hawley, whose office is defending the state law on behalf of Ashcroft.

Strategist Symone Sanders of Priorities USA, a Washington-based liberal advocacy group that sued on behalf of some Missouri voters, in a statement praised Callahan's ruling and criticized the photo ID law as having 'required voters to sign a threatening and confusing affidavit to receive a regular ballot if they didn't have photo identification.''

'What's confusing is the secretary of state's support of limiting access to the ballot box,'' she said.

Missouri's 2016 law was enacted when the Republican-led Legislature overrode the veto of then-Gov. Jay Nixon, a Democrat. Voters in 2016 also approved a constitutional amendment intended to permit photo identification laws. The Missouri law was not yet in effect for the 2016 elections.

Voter photo ID requirements have been pushed by Republicans in numerous states as a means of preventing fraud. They have been opposed by Democrats who contend such laws can disenfranchise poor, elderly, disabled and minority voters who are less likely to have photo IDs.

Yair Netanyahu making name for himself at home and abroad

JERUSALEM - As scandal-plagued Prime Minister Benjamin Netanyahu stands trial for corruption, his 28-year-old son has emerged as a driving ...

WASHINGTON, DC - Broadway actor Nick Cordero, aged 41, has passed away after a long battle with coronavirus.According to Variety, ...

WASHINGTON, DC - The novel coronavirus is continuing to spread in the United States, particularly in the western and southern ...

Philippine government to offer jobs at home for returning Filipinos

ZAMBOANGA CITY, Philippines July 5 (PIA) - The returning Filipinos who arrived Sunday in the city from Sabah in Malaysia ...

World must be better equipped to manage crises and future plagues

Wherever one is at anywhere in the world today - given the yet unknown first, second, third, fourth or however ...

Iran seeking return of 3 diplomats and journalist abducted in 1982

TEHRAN, Iran - Iran is rallying the international community in a bid to clarify the whereabouts, and return, of three ...

Demand for oil may have peaked

PARIS, France - Although crude prices have rebounded from coronavirus crisis lows, oil executives and experts are starting to ask ...

Nationalism an earth-shattering trend in shaping economies of future

Former U.S. Treasury Secretary Lawrence Summers has recently conceded: "In general, economic thinking has privileged efficiency over resilience, and it ...

A million Russians predicted to declare bankruptcy in coming months

Moscow [Russia], July 4 (ANI): As countries across the globe have been facing the worst collective economic downturn since the ...