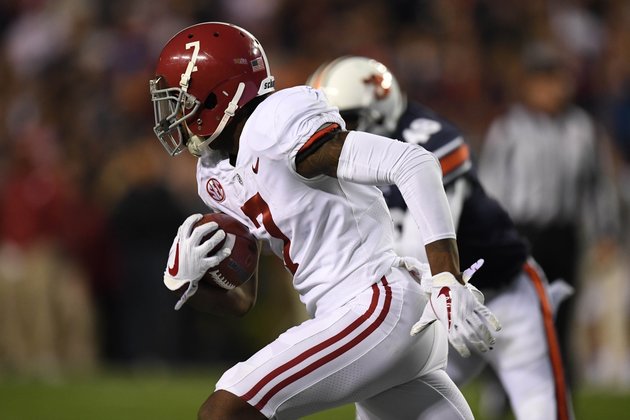 Alabama starting cornerback Trevon Diggs will miss the remainder of the season with a broken foot, according to a published report Wednesday.

Citing sources with knowledge of the situation, al.com reported that Diggs is expected to be sidelined four-to-six months with the injury.

Coach Nick Saban announced Diggs' injury on Monday and said he was ruled out indefinitely.

Diggs, who is the brother of Minnesota Vikings wide receiver Stefon Diggs, sustained the injury during Saturday's 65-31 win at Arkansas. He is set to undergo surgery to repair the damage to his foot this Friday, per al.com.

The junior had a season-high seven tackles and a pass defensed in that contest, with his tackle total just three shy of Dylan Moses' performance for top honors on the team.

Freshman Patrick Surtain II is expected to replace the 6-foot-2, 199-pound Diggs for No. 1 Alabama (6-0), which hosts Missouri on Saturday before traveling to Tennessee on Oct. 20.

Diggs has recorded 20 tackles and an interception in six games this season. His pick came off a Hail Mary in the Crimson Tide's 56-14 victory over Louisiana on Sept. 29.

Surtain, who is 6-2 and 202 pounds, has 12 tackles and a forced fumble this season. He had three tackles -- including one for a loss -- versus the Razorbacks.

WASHINGTON - Kurdish officials in northeast Syria are expressing disappointment following a vote by the United Nations Security Council that ...